Trailing-Take-Profit allows you to set your Trailing-Stop to trigger only after a certain profit has reached.

Written by Daniel Bar
Updated over a week ago

In one sentence - Trailing-Take-Profit is a condition that monitors the trend and sets to close the position above a specific profit and below a defined loss. In other words, by setting up a TTP, one can ensure that the profits reached during the rising of the asset are locked, before the price goes down, deleting the profits.

It may sound familiar from the Trailing Stop Loss (TSL), for a good reason. The difference between the two is that TTP is monitoring for the Trailing-Stop only after a certain profit, while a simple TSL does so from the highest point of the P/L. In other words, TTP is a TSL with a locked profit.


How to set a Trailing-Take-Profit

This exit strategy will trigger only when these two conditions are met:

Watch this tutorial video to see it in action

The left widget represents the Profit value. Continuing with our example strategy, here it shows 5%. When the strategy reaches a 5% profit, this part of the condition will be triggered and the strategy will start monitoring for the Trailing-Stop. The defined profit value is circled in red in the below image.

The right widget represents the Trailing-Stop value. We defined a 2% Trailing -Stop. The trailing stop can trigger only after the defined profit has reached.

If both values are the same (5%,5% for example), you can see what value the widget represents at the description at the bottom of the widget. 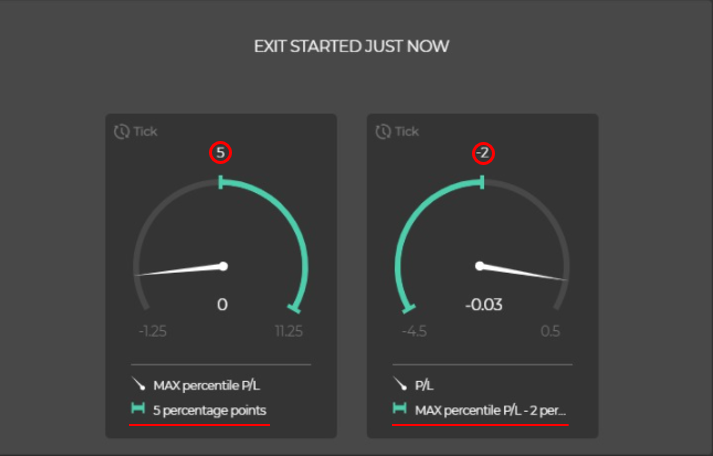 In the below example we will continue using the Trailing Take Profit (5%, 2%).

The two right columns will indicate in which scenario the conditions are met. Please note both conditions should be met in order for the order to execute.

Per this example, we have made a 6.78% profit, instead of the expected 5%. Another thing is that we have managed to take the profit even though the price dropped right after the entry and before another downtrend took action.

This content is intended for informational and educational purposes only and should not be considered investment advice or an investment recommendation. Read more here.

Did this answer your question?